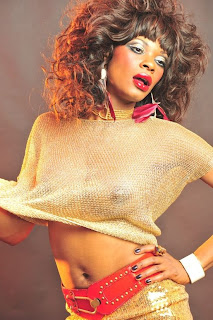 CoCo Brown, the most exciting gal in the industry, joins the Star Factory PR family.

To say that CoCo Brown (http://twitter.com/itscocobrown) has had an adventurous career might be the understatement of the decade. The sensationally beautiful CoCo Brown seems to have lived multiple lives and in a myriad of careers all while garnering a huge fan base and reinventing herself only to become more popular than ever. CoCo thrives on a thirst for adventure, and has never backed down for a challenge, whether it was filming top selling XXX movies, creating music with industry greats or exploring the new frontier and training to become an astronaut. Sounds a little unbelievable, but that's how CoCo has lived her life and the results are "out of this world."

CoCo Brown began the first tier of her mulit-faceted career as a dancer in one of Las Vegas' most notorious clubs, Deja Vu. It was there an adult producer noticed her natural beauty and electrifying personality. CoCo was offered a role in an XXX movie, an offer she accepted a few months later. She filmed her first adult movie under the name Honey Love and was an instant success. Her first movie role quickly spiraled into another 40 films, multiple award nominations and a Venus Award win in 2002 for "Best New Starlet" and before long, CoCo was one of the most sought after actresses in the adult industry.

Her adult career moved her to Germany when she retooled her brand, changing her name to CoCo Brown. She remained a successful XXX performer but started to cross over into mainstream work with a myriad of television appearances and modeling gigs for men's magazines all over the world. Among her many successes, CoCo's lifelong love for music started to come to fruition. She was cast in a music video by a top music producer which led to the start of her career. Since then CoCo has worked with popular musicians such as OG MellyMell, Donte Cater, Gooch and Wu Tang Clan.

"We are thrilled that CoCo Brown has joined the Star Factory PR family" said Tanya Tate, owner of Star Factory PR. "She's beautiful and she's daring. She's not afraid to try new things and because of that, she has had a career that many people can only dream about. She's done well in so many different industries and we're happy to help her build her brand and promote the multi-faceted career she's built. And of course, her newest venture is so exciting, we're going to have tons of fun promotion and learning about CoCo's venture into space."


And her fans are just as excited to know about CoCo's journey to becoming an astronaut. CoCo is in training with the company Space Expedition Corporation to become the 1st adult star and 2nd African American woman to fly into outer space. Scheduled to depart in 2014, CoCo is tackling the "last frontier", adding an unbelievable chapter onto her already fascinating career. If her audiences didn't already think space was sexy, CoCo is making sure it gets a reputation change.

For more on CoCo Brown, visit the CoCo Brown network:

About CoCo Brown:
CoCo Brown's unbelievable career began in Las Vegas. As a dancer in the world famous Deja Vu Strip Club, CoCo caught the eye of an adult producer who offered her the chance to shoot her first adult movie. She did so under the name Honey Love and was an instant success, quickly filming another 40 movies and turning into one of the most sought after performers in the industry. After a move to Germany, she decided to retool her brand, performing under the name of CoCo Brown. As her fan base grew, CoCo started to cross over into multiple facets of mainstream media. From television appearances to modeling for a myriad of men's magazines, CoCo's fame began to grow. Among her many gigs, she landed a spot on a music video. With a passion for music, CoCo was discovered by the producers on set which lead to a music career with some of the top players in the music industry such as OG MellyMell, Donte Cater, Gooch and Wu Tang Clan. In 2012, CoCo started on her journey to fulfill a lifelong career - she's started training to become an astronaut. CoCo has teamed up with Space Expedition Corporation to train to take flight into outer space in 2014. She will be the 2nd African American and the first Pornstar to explore the "last frontier". CoCo's Brown's incredible career has been been unstoppable thus far, and now she's ensuring her next journey is "out of this world."