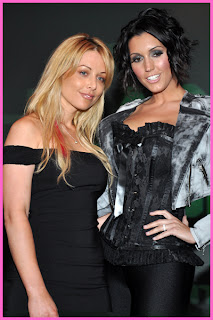 Sexy adult contract starlets Kayden Kross (Digital Playground) and Dylan Ryder (Bluebird Films) graced the stage last month at the 2012 XRCO Awards where Kross and Ryder played hostess to the annual industry-only party and helped pay tribute to the best and brightest in_XXX for the year 2011 (releases from Jan 1 through Dec 31, 2011).

The 28th Annual XRCO Awards Show was held on Thursday April 12th at The Hollywood Highlands and featured a number of memorable moments. The beautiful hostesses kept the evening hopping and hot from the very beginning. Mixing in plenty of fun along the way Kross did an impressive job in return to hostess duties.

"XRCO was a blast as always," says Kayden. "Dylan Ryder was a great co-host and the night was relaxed and fun. I always look forward to it."

In a change from past tradition, the XRCO Hall of Fame inductions kicked off the evening.

"Mike Moz suggested that we change things up a bit and do the Hall of Fame at the beginning of the show rather than midstream during the evening, and this worked quite well," revealed XRCO Chairman Dirty Bob when asked about the slight rescheduling of the order of presentation. "I was quite pleased that most of the 'Hall of Fame' inductees were able to attend in person and accept their award. Just seeing their heartfelt gratitude and happiness when they were inducted makes the entire evening, and all of the year-long work involved making it happen, worthwhile."

It was an equally big night for Elegant Angel. In addition to the win for "Asa Akira is Insatiable 2" the powerhouse production company also scored wins for their huge hit "Portrait of a Call Girl." The movie was named "Best Epic" and scored hardware for its lead actress Jessie Andrews and director, Graham Travis for "Best Actress" and "Best Director, Feature" respectively.

"I'm very honored to receive the awards from XRCO for 'Portrait Of A Call Girl'," says Travis. "To receive this recognition from such a historic organization of critics means so much to me and the whole team who did such an amazing job on this movie. Thank you XRCO."

To find the show photos and winners and noms, go to www.xrco.com and under RECENT ANNOUNCEMENTS on the main page click on:

We would like to thank all of the media who covered the event. On our web site, www.xrco.com, we will be highlighting photos of some of the photographers from that evening. Contact the XRCO if you would like your work featured.

XRCO offers congratulations to the nominees, the winners and gives thanks to all of those involved with making the evening a huge success. Special thanks to our beautiful hostesses Kayden Kross and Dylan Ryder and the "Heart-On Girls" Cherry DeVille and Allie James, and the many people behind the scenes including, but certainly not limited to, Mike Moz, Monstar, Steve Nelson, Dr. X, Brad Thomas, Jared Rutter, everyone working the Red Carpet, and the fine folks at Highlands Hollywood who put up with our antics every year.

"Of course we want to thank our great and loyal sponsors - especially Wicked Pictures who has been a strong supporter and sponsor of the show every year for over 15 years," added Dirty Bob. "Without Wicked's help it would be difficult giving such a great night back to the industry by helping with this annual industry-only party and awards show. We are also very grateful to our new 2012 sponsors as well: Smash Pictures, Jules Jordan Productions, Axel Braun Productions, X-Play, our fine publicity group Pipeline Multimedia, and others - and, of course, I.A.F.D. and_Deep Throat Energy Drink which has been with us for the last few years."

ABOUT XRCO:
Founded in 1984, the XRCO was formed to give writers and editors from the adult entertainment industry a voice in selecting the best in and brightest in the world of adult cinema. Original members included a small group of writers from Los Angeles, New York and Philadelphia. Over the years, select and qualified membership has expanded to include some of the best adult reviewers from both print and internet. In 2005, the XRCO welcomed its first European members. 2009 marked a quarter century of excellence with the XRCO's Silver Anniversary.