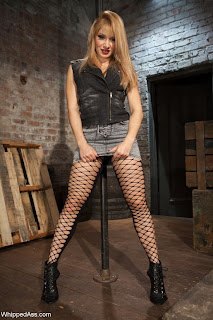 The 2013 XRCO Unsung Siren nominee stars in a film that may have been downloaded in Vatican City.

Exotic adult star Lea Lexis (http://twitter.com/lealexisxxx) is one of the starring actresses in an adult film that appears to have been downloaded by the Vatican. TorrentFreak.com broke the story with the release of a list of pornographic torrent files downloaded in Vatican City, the city-state that serves as the base for the Catholic church. The small holy city within Rome houses less than 800 citizens and included in its list of pirated materials was a XXX scene starring Lea Lexis and Krissy Lynn for one of Kink.com's website labelled WhippedAss.com. The hardcore film features both actresses engaging in S&M, bondage, whips and hardcore sex.

Lea appeared on HuffingtonPost Live (http://live.huffingtonpost.com) to give her take on the story and admonish the Catholic residents for breaking one of its 10 Commandments, "Thou Shalt Not Steal." The former professional gymnast called the Holy See hypocritical for its public condemnation of pornography and hopes that this revelation will make more the adult industry less taboo.