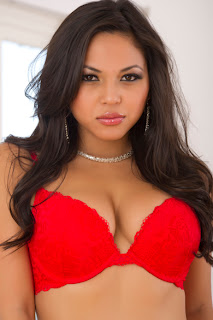 After a solid year of delivering consistent raw hardcore performances, break out star Adrianna Luna ( http://twitter.com/adriannalunaxxx) is honored with an AVN Awards nomination for Best New Starlet. Since launching her career Adrianna has been hitting hard with every scene and shining in both intense gonzo videos and story driven features. Fresh off her Best New Starlet win at Nightmoves and November Penthouse Pet of the Month stint, Adrianna has even more reason to rejoice.

"Wow, this is truly incredible," said Adrianna. "I've committed myself to adult entertainment, always give my best and to be nominated for AVN Best New Starlet is thrilling. Penthouse Pet, now this. I am very appreciative and thankful of the recognition I have received."


The exotic beauty not only gave a stellar opening year, but looks to deliver on the promise of making more exciting movies in the years to come. "People tell me they love my scenes, they love watching how passionate and nasty I can be," said Adrianna. "That's because I love doing what I do and plan to continue making hardcore, dirty scenes for years to come. I love my job and plan to take things up a notch in the future."

In addition to Best New Starlet, Adrianna was also nominated for Best All-Girl Group Sex Scene for an undeniably heated performance in Harmony's Mind Fuck. Along with established sex stars Skin Diamond and Celeste Star, Adrianna brought her own arsenal of impressive maneuvers and contributed to must-see scene.

The 2013 AVN Awards will be announced on January 19th at the Hard Rock in Las Vegas. More information on the awards can be found on the show's official website: http://avnawards.avn.com