Venus Lux Wants All Eyes on Her 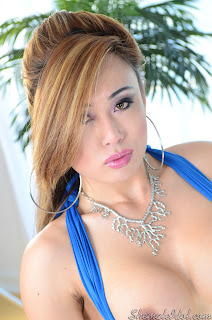 Newcomer Venus Lux launched her adult career six months ago. She’s filmed for the top tgirl studios and websites, including Kink, Evil Angel, SMC, Grooby, Devil’s Film and Bob's Tgirls, and started her own YouTube channel. To further her career, she’s retained the services of The Rub PR.

“The only way from here is up,” says Venus Lux. “My career is definitely on the upswing and in order to make a splash, I knew I had to promote my career professionally and strategically, and that’s why I hired Erika Icon and her team. I believe in taking the bull by the horns and going all the way—that’s why I’m running my own site and not turning it over to a network. I will have more control over my content, the aesthetic of the site and who I’m performing with, and the success I achieve will be all mine because I worked hard for it.”


Venus can currently be seen on Kink.com’s TSPussyhunters with Kaylee Hilton, Kink.com’s TS Seduction with Mike Panic and Grooby’s ShemalePornstar.com with Christian XXX—all three scenes have received stellar reviews and are helping to grow her fan base. Look for Venus in Joey Silvera’s “American Shemale X 2” through Evil Angel, along with her mainstream role in the Indie film “Little Saigon”.

Studios, websites and photographers wishing to shoot Venus can book her directly by emailing her at venuslux@ymail.com. All requests for interviews, appearances, magazine placement and general media inquiries about Venus Lux should be directed to Erika Icon of The Rub PR at erika@therubpr.com.

ABOUT VENUS LUX
Her name says it all—she’s a Libra ruled by Venus who revels in luxury. Venus Lux may be the newest t-girl on the scene, but she’s definitely one of brightest stars on the horizon. Her goal is to be known as the transsexual who can do it all, and shine in mainstream, adult, and business. With just 6 months in the biz, the statuette, Asian goddess has filmed over 20 scenes for top studios and websites, including Kink, Evil Angel, SMC, Grooby, Devil’s Film and Bob's Tgirls. Her site, venus-lux.com, is set to launch in the next few months, and will make history by featuring some of the biggest names in adult and being the only tgirl-run site not through a network. Until her pay site launches, follow her adventures on Twitter @Venus_lux and tune into her YouTube channel http://www.youtube.com/user/venatalux.

Mega888 Slots has recently demonstrated to the world their arms for open games, and personal responses have been enthusiastic. Mega888 is one of the most Best Casino App.
MEGA888