Britney Amber Is Immoral Productions’ Model of the Month 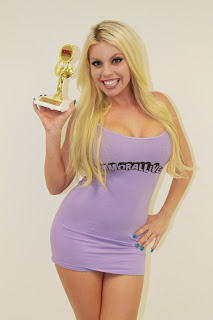 Immoral Productions has announced the recipient of their fourth model of the month award—it’s Britney “Baby Whore” Amber. Even though production was halted halfway through the month because of a moratorium, Immoral Productions still shot almost two dozen models, and several of them starred in some superb shows.

“Britney Amber has shot for us well over a dozen times, signed for us at the AVN show and represented us at the Phoenix Forum,” says Porno Dan Leal, CEO of Immoral Productions. “In August we finally got her to come to be the main model for Fuck A Fan. Our ‘Baby Whore’ performed like I thought she would, and it was one of the best Fuck A Fan shows we have ever done. Britney is so much more than a pretty face; she is one of the sweetest girls I have ever had the pleasure of working with. I always look forward to the days when I see her name on our schedule.”

“I always have so much fun when I come to shoot for Dan and the guys at Immoral Productions,” says Britney Amber. “I get to be myself and do things that I really like to do, and this is where I earned my nickname, ‘Baby Whore’!”

All requests for interviews, appearances, magazine placement and general media inquiries about Britney Amber should be directed to Erika Icon of The Rub PR at erika@therubpr.com.