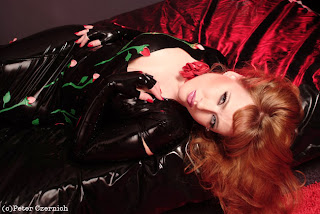 With so much buzz over 50 Shades, there needed to be a true BDSM/fetish DVD version! Releasing this week is Julie Simone’s latest feature “50 Shades of Red” starring Rebecca Reynolds and Julie Simone. The film has an intricate plot that has Julie being punished and dominated for hiring Reynolds’ husband as a cameraman. What ensues is revenge on Julie’s mouth, tits, ass and pussy in 90 minutes of hair pulling, forced dildo worship, handcuff hogtie, on-screen mouth gagging with mouth stuffing, foot smothering and gagging, wax play, clothes destruction, psychological torment, cigarette predicament, ball gags and of course, spanking and caning! Julie Simone also wrote the script and directed the action. To view the trailer, go to http://www.juliesimone.com/trailers/50_shades_trailer.mp4

Unlike previous titles released this year, “50 Shades of Red” is being distributed through Bon-Vue. To place an order, contact George at 800.827.3787 or jcasas34@aol.com. Orders can also be placed through Julie Simone Productions by emailing bookingjuliesimone@gmail.com.


"Award-winning director Julie Simone has always been a heavy hitter. Her sub work is always intense and this is one of the most intense videos I've ever seen her do,” says Bon-Vue owner George. “We're happy to be doing business with her again."


For more of Julie's catalog visit http://www.videos4sale.com/store/9861 All requests for interviews, appearances, magazine placement and general media inquiries about Julie Simone should be directed to Erika Icon of The Rub PR at erika@therubpr.com.