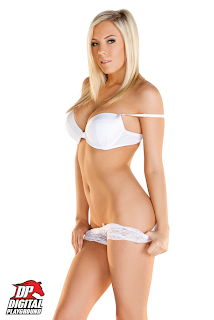 For stand-out performances across an amazing year, super starlet BiBi has been nominated for an ED 2012 Entertainer Award and looks to fan support to help her win.

Digital Playground (DigitalPlayground.com) contract star BiBi Jones has attained a nomination for Exotic Dancer’s 2012 Newcomer Feature Entertainer of the Year. As the break out star began dancing, her popularity skyrocketed due to her Digital Playground hits topping the sales charts and the mainstream media attention she has become a familiar face of. With a feature show that is an undeniable display of sexy, BiBi turns up the heat in her showcase leaving fans have been packing houses to see the adult entertainment phenom, breathless.

“I am honored by this nomination!” said BiBi. “It has been a lot of work and a lot of shows, but its been worth every minute of it. I love meeting my fans and dancing, so this experience has been great. I truly appreciate ED Magazine for taking notice of me and my agent Dave Michaels at A-List Features who keeps my schedule full and makes sure I am out there meeting my people.”

“A-List Features is really proud of BiBi's success on the road featuring,” said Dave Michaels. “She started in September of last year and hasn't stopped packing clubs since. She has a solid re-booking rate because she is hot, personable, professional, and has the Digital Playground brand behind her. I wish her luck!”

The Exotic Dancer awards are fan voted, so BiBi is encouraging her supporters to aid in solidifying her win by visiting the Exotic Dancer voting page and cast a vote for her. BiBi has put out the call to rally her near quarter of a million twitter followers (Twitter.com/XXXBiBiJones) and has been rewarding them with sexy candid self-pics of herself. More info about the 2012 Exotic Dancer awards show can be found on the ED website here: http://www.edpublications.com/expo/the-awards-show-2012 and voting for BiBi can be done here: http://theedawards.com.

While the winners of the Exotic Dancer awards will not be announced until August, fans of BiBi have something else to look forward to; her mischievously sexy performance in Nurses 2! To be released June 26th, the buzz on Nurses 2 has already reached a fervor pitch. The hottest sex comedy of the summer showcases the beautiful BiBi alongside her Digital Playground contract sisters Jesse Jane©, Kayden Kross, Riley Steele™ and Selena Rose™. BiBi stars as the naughty daughter of one of the doctors who stops by for a visit that tuns into a catastrophe. After receiving a thorough body examination by “Dr.” Erik Everhard, BiBi role plays as one of the doctors to give Mick Blue a physical of her own.

The "Not Safe For Work" trailer for Nurses 2 can be seen viewed here: http://bit.ly/N2Trailer

The box cover for Nurses 2 can be seen here: http://bit.ly/LLIgxN

After a phenomenal year of headlining gentlemen's clubs across the country BiBi has been nominated for Exotic Dancer’s Newcomer Feature Entertainer of the Year! The winner will be announced on August 28th, until then everyone can be a winner by watching BiBi sexify the screen in Nurses 2!

About BiBi Jones™:
BiBi Jones™ is the newest and youngest Contract Girl at Digital Playground. She was born and raised in Oklahoma but now calls Arizona home. She came to DP by way of fellow Oklahoma girl Jesse Jane®. BiBi struck up a friendship with Jesse on Twitter who put her in touch with Digital Playground’s Founder and C.E.O. BiBi was flown out to California in December 2010 and within an hour of meeting her, signed her as a contract girl! The barely legal beauty says she aspires to be the “Taylor Swift of porn” -- fresh, young and totally committed to her fans. Despite her girl-next-door looks, BiBi admits she can be a bad girl who’s always been super sexual, “I’ve always wanted to be that girl on film getting freaky!” The world will be seeing a lot more of BiBi in the coming year. She has shot covers and spreads for several magazines including Hustler, Penthouse and Club. BiBi can be found on www.digitalplayground.com.

About Digital Playground:
Digital Playground is the world leader in adult filmmaking and interactive formats boasting the largest HD library available, as well as sexy and powerful novelty lines to compliment blockbuster films. Since the Company’s inception in 1993, Digital Playground has earned over 350 awards, currently garners more than 80% of high definition sales within the adult market, and is a leading provider of Blu-ray™ titles. Digital Playground emphasizes quality first, employing fastidiously high production values in erotic film for women, men and couples. Digital Playground’s commitment to excellence, innovative technology, brilliant full-length productions and exclusive Contract Stars are the secrets to its success and makes Digital Playground the most highly demanded supplier of content for hotel, IPTV, cable, pay-per-view and mobile networks worldwide. For additional information, visit www.digitalplayground.com, www.facebook.com/DigitalPlayground, or www.twitter.com/dpxxx