Good As Gold: Aurora Snow & Gauge Together in Philly 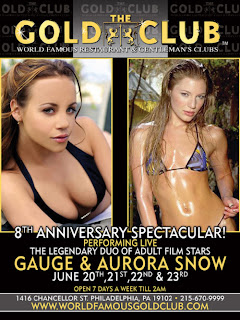 Back in her performing days, Gauge frequently shared the screen with Aurora, including a scene which featured the two fresh starlets in pigtails that has become so iconic it still pops up years later. However, this is the first time the two fan favorites have teamed up for a feature dancing gig.

“I can’t wait for this one,” says Aurora. “It will be the first time Gauge and I have made an appearance together. She is a great performer and I hope this is just the beginning for us. We are going to really enjoy each other and put on one heck of a show for the fans. I look forward to several other engagements together.”


As always, there will be lots of give-aways and a special meet & greet for fans after each show. Aurora and Gauge will have DVDs, 8x10s and other items to autograph. Best of all, both performers will be available for lap dances for that up close and personal show.

Don’t miss Aurora Snow with special guest Gauge at the Gold Club in Philadelphia June 21st thru the 23rd.

About Aurora Snow
Aurora Snow is one of adult films leading ladies. Using her unique combination of girl-next-door looks and explosive sexual energy she has delighted fans and critics alike in over 400 films to date. Her efforts have earned her numerous awards including AVN’s Performer of the Year in 2003. She has made cameo appearances in such mainstream films as “Superbad” and continues to work on camera in both adult and mainstream. Aurora has recently been featured in her own autobiographical graphic novel from Carnal Comics and has her own skateboard through Pornstar Skateboards. Currently Aurora is working on her web site www.AuroraSnow.com where she produces exclusive content to delight her many fans. She has also recently begun work on a book project to be released in 2010.