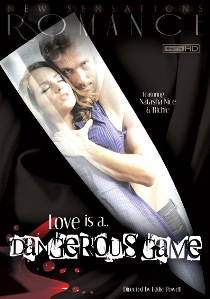 New Sensations has released the trailer for the next installment of The Romance Series entitled “Love is a Dangerous Game”. The Romance Series caters to women and couples searching for adult entertainment to enhance their own sexual experience. Starring Natasha Nice, Richie, Kimberly Kane, Rocco Reed, Jack Lawrence, Kelly Klass, Alyssa Branch, and Xander Corvus, “Love is a Dangerous Game” is the thirteenth title in the series and the ominous number is a clear indicator of what you might expect from this suspenseful new film.

Lead actor, Richie says, “Love isn't always understood or condoned by those outside the reach of its spell. Sartre said ‘hell is other people,’ but heaven can be that one particular person who makes you feel free and who cherishes the weird stuff about you - the stuff that scares most people away. ‘Love is a Dangerous Game’ is about the fear that comes with being in love with someone that doesn’t fit into a perfect package. Ultimately that’s what makes it such an incredibly romantic story.”

In “Love is a Dangerous Game,” when children's writer, Paulina Connelly, decides to embark on a new career writing horror she has no idea how it will completely change her life. Needing guidance, she seeks advice from acclaimed horror novelist, Wes Mueller. In their first phone conversation she feels an undeniable connection and agrees to meet with him. But, as their relationship progresses, information about his suspicious past comes to light causing her to fear for her own safety. Is Wes the man of her dreams?...or will Paulina be his next victim? Combining female and male perspectives, “Love is a Dangerous Game” features a script from Jacky St. James and is directed by Eddie Powell.

St. James says, “I wanted to write something that was unlike any other romantic film available in the adult market today. Something with a unique story that’s also stylistically different. But don’t be mistaken, ‘Love is a Dangerous Game’ might not follow the standard formula for romance, but it’s still a love story. It touches on the theme that people aren’t always who they appear to be—and how that can be the best or worst thing in the entire world.”

To watch the trailer for The Romance Series’ “Love is a Dangerous Game”, visit: http://www.youtube.com/watch?v=0kK2vXDUkTY


About The Romance Series:

The Romance Series from New Sensations is a masterfully passionate movie line and the first collection to cater to the erotic needs of women and enhance their sexual experience. Seducing female consumers with stories of sensuality, connection and devotion, The Romance Series promotes the tingling, butterflies-in-your-stomach, giggly excitement girls crave. It combines elements of the greatest love stories of all time with sensual pleasures. To complete the experience and keep the interest of both men and women, The Romance Series includes full-length, hard-core sex scenes, which stay true to character as each story unfolds. Gorgeous performers and elicit details add lust and fantasy to the romantic equation, making The Romance Series perfect for everyone. Current titles in The Romance Series include “With This Ring”, “Dear Abby”, “Recipe for Romance”, “Lost and Found”, “A Little Part of Me”, “Almost Heaven”, “Awakening to Love”, “An Eternal Love”, “An Eternal Love 2”, “An Office Romance”, “The Engagement Party” and “The Wedding Day”. For more information, visit www.TheRomanceSeries.com, www.Facebook.com/TheRomanceSeries or www.Twitter.com/RomanceSeries