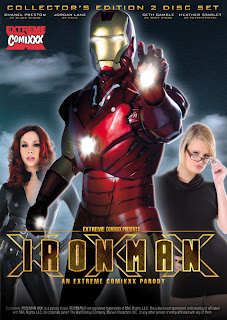 When Iron Man’s identity is revealed to the world, his enemies come out of the woodwork to take revenge. Stark’s ex lover, Madame Masque (Amber Rayne) wants him dead, and she’s gained control of The Hulk (Jordan Lane) to do all her dirty work. Stark’s rival, Justin Hammer (Alex Knight), and his daughter, Justine (Gracie Glam) are also after Iron Man, using his technology against him. Iron Man’s only ally is a mysterious Russian super-spy, The Black Widow (Chanel Preston).