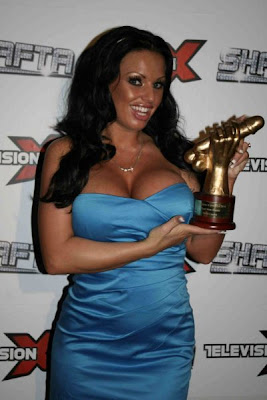 
“I am excited! This is my first award and I couldn’t be happier!” said Kerry. “I would like to thank Television X, The SHAFTAs and of course all the fans who voted for me. I have a lot of new movies and scenes coming out this year. Expect to see a lot more of me.”


More information on the SHAFTA Awards can be found on Television X’s blog; http://www.televisionx.com/2010/03/shafta-winners-announced/


American fans who want to meet the newest XXX sex star to invade our shores are in luck as Kerry is set to make an appearance at the upcoming Adultcon (http://www.adultcon.com/) in Los Angeles. For three days beginning April 9th, Kerry will be signing autographs, DVDs and posing for pictures at the industry staple. For those that want to get up close and personal with the award winning sex star, they have three days in L.A. to make it happen! Adultcon will be held at the Los Angeles Convention Center in downtown L.A., more info can be found on the show’s official website Adultcon.com. Fans not in L.A. can still keep up with Kerry by subscribing to her official newsletter on www.pleasekerrylouise.com.


Kerry Louise wins SHAFTA’s Best New Starlet Award! The first of what is sure to be many crowning achievements for the brunette beauty.