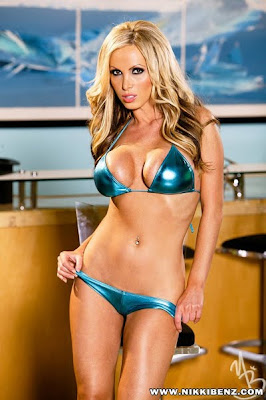 Nikki Benz is a woman of many talents. She is an adult entertainment superstar, a mainstream crossover hit and a successful businesswoman. Among her exceptional abilities is to seriously fill out a T-Shirt. Her obvious charms are quite eye catching and grabbed the attention of T-Shirt manufacturer TITS (Two in the Shirt). They were so impressed by Nikki and her shirt stuffers that they will feature Nikki in her own line of T-Shirts.

The first design in the Nikki/TITS collaboration is called “Bring Em Out” and features Nikki at her busty best. “I think it's so appropriate for me,” says Nikki. “Everyone knows I've got two big ones in my shirt and I do like to bring them out! They have even done a special mint color for my first shirt. I love the mint color, it's definitely a fresh color for spring time."

The shirts can be viewed and purchased at www.shoptits.com/nikkibenz.aspx "Bring Em Out T-Shirts" come in black, white and mint. Shirts will be available for wholesale distribution worldwide starting Summer 2010.

Marek Grubel, founder and owner of TITS believes that Nikki is a perfect fit for his brand. "We are huge fans of Nikki,” says Marek. "Upon meeting with her we realized she is business and marketing savvy which made it a no brainer for the collaboration. We couldn’t have found a better 'two in the shirt' to help represent what it is we do here at TITS BRAND."

Future designs are already in the works, including the next shirt “Mob Related” which was selected via on-line poll. Nikki and TITS asked fans to vote in a poll, choosing between four designs featuring Nikki in sexy poses. The winner has been selected and the new design will be revealed soon.

“My fans know what a huge fan of mobster movies I am,” Nikki said. “The Mob Related shirts will appeal to fans of hot chicks and mob movies alike. My fans are amazing! So many of them took pictures with my Bring Em Out shirt and posted them on Twitter for the world to see. Gotta love social networks, it's great. I am definitely looking forward to branching out in the merchandising world and extending myself to my fans not just through my sex scenes or my website, but through mainstream media and merchandising."

The T-Shirt deal with TITS is just the latest project for Nikki. Her career has taken off in both the adult and mainstream industries.

"I couldn't be happier with everything that's going on with my career right now,” states Nikki. “I have a recurring role on www.FoxSports.com, I'm traveling the world making celebrity appearances, attending trade shows, feature dancing throughout the U.S. and Canada, shooting the hottest sex scenes for the biggest production companies, appearing in magazine layouts and now this! My own T-shirt line for which I collaborated with TITS Brand!"

All shirts will be available for wholesale distribution starting Summer 2010 and continuing through 2011.
For more of Nikki Benz visit www.NikkiBenz.com.