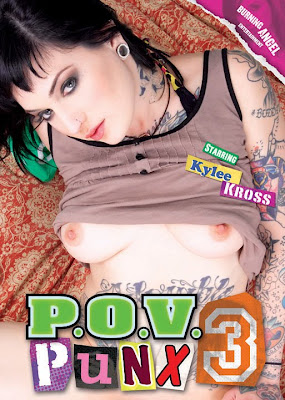 In addition to her authentic punk rock swagger and voracious sexual appetite, Kylee's stylish physique features some stunning ink, including a pair of wings across her upper chest and a full sleeve that adorns her left arm.

A lean, mean vegan of Cuban extraction, Kylee is pleased to be returning to the Burning Angel fold after a refreshing hiatus that only served to increase her appetite for onscreen depravity. To formalize her "return," she'll be coming to Los Angeles in mid-March to promote P.O.V. PUNX 3 and other forthcoming film projects.

In addition to Kylee, P.O.V. PUNX 3 also features stellar contributions from sultry Misti Dawn, about whom Joanna reveals, “most people don't know it, but this girl has devoted her life to saving animals. She studies Biology in school, and hopes to graduate and save even more animals than she already has by becoming a veterinarian. She's a straight A student, but took some time off from school to make some dirty movies. She loves to fuck just as much as she loves saving animals. But you would never know it! Don't be fooled by her adorable exterior - animal lovers have needs too! She's a vegetarian who craves meat...specifically cock!” A tawny redhead with dangerous curves and a charming Midwestern twang, Misti shines in the first of several intimately shot encounters.

The balance of P.O.V. PUNX 3 features five more of Joanna’s hottest girlfriends in a variety of sexy, "you are there" scenarios that put the viewer in the driver's seat each step of the way. The show’s wild cast consists of only the most popular Burning Angel girls, including 2010 AVN Award Nominee Draven, about whom Joanna quips, “she is just SO hot - she loves Harry Potter, has a Burning Angel tattoo, and rules at Rock Band...what could be sexier than that?” The exotic Kleio, Violet, Korene and stunning brunette sensation Phoenix Askani round out the dance card.

As always, this entertaining punk-porn hybrid's hardcore action is laced with the kind of offbeat humor that's become the Burning Angel trademark. As Joanna puts it, "watching these P.O.V. scenes will make you feel like we're in your bedroom. There's no bullshit in this movie - no cheesy stripteases or fake moaning and groaning.

To arrange an interview with Kylee Kross, please contact brian@bsgpr.com or danielroadstomoscow@gmail.com.