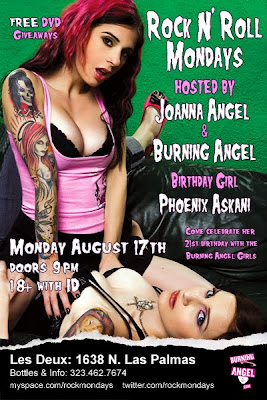 Ready For A Little L.A. PINK?


LOS ANGELES, CA - (AUGUST 17, 2009 ROADS TO MOSCOW) - As part of the media blitz surrounding the September release of her feature parody L.A. PINK, Alt-Porn Princess JOANNA ANGEL is pleased to announce she's throwing a birthday party for BURNING ANGEL's own PHOENIX ASKANI. This exercise in Rock N' Roll revelry is slated for tonight, August 17th at Les Deux in the heart of Hollywood.

An infamous A-list hot spot that opens its doors to rock fans every Monday night, Les Deux promises no cover, no hip-hop, no techno, and no bullshit. Just non-stop Rock N' Roll and an opportunity to celebrate Ms. Askani's birthday with Joanna and the rest of the Burning Angel crew.

"It's Phoenix's twenty-first birthday, so this is my way of saying 'thanks for being hot and a great fuck, and an awesome Burning Angel member-turned-porn-star,'" Joanna laughs. " I'll be hosting an amazing birthday party for her filled with DVD giveaways and Burning Angel debauchery!"

Tonight will feature live music in the main room from such bands as ASSEMBLE THE SKYLINE, BAD FATHERS, FUN TREE and REALITY BITES while go-go girls tear up the stage and rock DJs spin the best in punk and heavy metal outside.

No cover, cheap drinks, wild music, DVD giveaways, and the girls of BURNING ANGEL...Come to Les Deux Monday night and keep the spirit of punk alive!