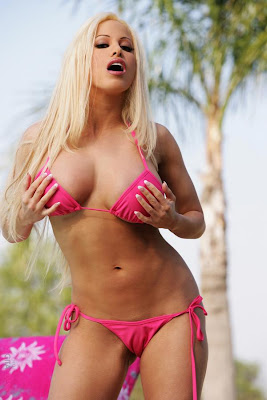 (PHILADELPHIA, PA) Gina Lynn’s rapidly expanding mainstream resume becomes more impressive by the day. She and husband Travis Knight are about to open their second Skin retail outlet in the Berkshire Mall in Reading, PA. The grand opening will be June 1st.

Gina will be heading down to Florida for the Exxxotica Miami show May 8th-10th. She will be in the Gina Lynn Productions booth promoting her latest releases and her web site. Skin will also have a booth selling shirts and hats On Saturday May 9th Gina will host a party along with Jesse Jane at Tootsies in Miami.

“The Exxxotica Miami show is always one of my favorites,” says Gina. “It’s a great city with amazing night life and we are going to give the fans something special at the show and at the parties as well.”

Her mainstream film career has also taken off recently. Her most recent feature film, “Allure” is in post production. Gina plays the female lead in the Shawn Cain drama.

“I am really excited a bout Allure,” says Gina. “It is my biggest mainstream part so far. It came out great.”

The trailer for “Allure” can be viewed at:

As if adult entertainment, retail clothing and feature films weren’t enough to keep Gina hopping, she is also filming a commercial this month. Quote Runner has hired Gina for their latest spot for their site Quoterunner.com.

“It was a fun filled day flirting with some young busty models. The commercial reminded me a lot of that Progressive spot with the bubbly brunette, only this one was hotter,” exclaims Gina.

With all of these mainstream projects and a full slate of adult ventures, Gina Lynn remains the hardest working businesswoman in adult entertainment.

Gina will be at the Exxxotica Miami show May 8th-10th promoting herself, Gina Lynn Productions and also have a booth for SKIN selling shirts and hats.

Gina will be hosting a party Saturday night May 9th at Tootsies in Miami along with Jesse Jane.

ABOUT GINA LYNN
Blonde, bold and beautiful, Gina Lynn is a true superstar who has taken the adult world by storm and shows no signs of slowing down. During her seven years in the industry, Gina has bridged the gap between the adult and mainstream worlds while always doing things with her own unique flare. Since entering the adult film industry in 2000, the hard-bodied Puerto Rican goddess has been a favorite of both fan and critics alike, and she has appeared in mainstream television shows such as "The Sopranos," in movies like "Analyze That," and in Eminem's video for "Superman." Her production company, Gina Lynn Productions has taken off in the last three years. It is clear that the future holds even bigger things for this dynamic young woman. Gina can be found on her re-launched website www.ginalynn.com, with exclusive content and fan merchandise, it is the perfect place to find all things relating to Gina. For more Gina online check out www.ginalynnproductions.com, her official MySpace page www.myspace.com/ginalynnxxx and her newest site www.ginastoybox.com.

ABOUT GINA LYNN PRODUCTIONS
Formed in 2004 by adult superstar Gina Lynn and her husband Travis Knight, Gina Lynn Productions came charging out of the gate and hasn't slowed down for a second. The two veteran adult performers share in all aspects of the company, working in front of as well as behind the camera and overseeing a number of top-selling lines. Among the growing catalog of titles from Gina Lynn Productions are such successful series as "Gina Lynn's Top Notch Bitches," "Double D's & Derrieres" and "Fantastic Ho's." All titles are distributed independently by Gina Lynn Productions.

For Gina Lynn Productions on the web, visit www.ginalynnproductions.com