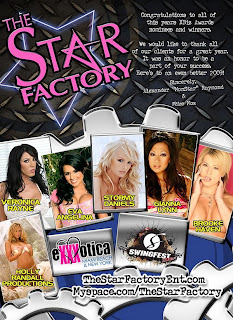 The camera flashes of the press photographers! The glamour of the adult industry's hottest stars! All will be found on February 12th at the 2009 Xbiz Awards and the established talents of The Star Factory publicity have been tapped to run the event's red carpet! Hollywood will heat up and the stars will be on hand to be seen before the mainstream and adult press as they enter Boulevard 3 for the show. The team of Alexander (Monstar) Raymond and Mike Moz will act as liaisons between the media, talent and event organizers.

"We are excited and enthusiastic that Xbiz has the confidence in our capabilities to handle the Red Carpet of their awards show," said Raymond. "This is a very major event for them and to entrust us with such important duties is something we appreciate."

The expected amount of talent and press for the wild night is going to be massive; however The Star Factory's experience perfectly qualifies them to handle the task. Having worked the red carpets of a multitude of adult and mainstream events, including the AVN Awards for three years running, The Star Factory team is ready for the night!

The Star Factory was launched in 2007 with its first client, adult actress Taryn Thomas and quickly made a name for itself with forward thinking ideas, professionalism and aggressive promotions. Since its inception The Star Factory has worked with the top tier of Adult Entertainment Stars, Projects, Agencies and Companies. Some of The Star Factory clients have included the World Famous (and possible future Senator) Stormy Daniels, Multi-Award winning Eva Angelina, Fox reality stars Veronica Rayne & Brooke Haven, Zero Tolerance contract star Courtney Cummz and the eXXXotica Miami & New York events.

It's going to be an exciting night on February 12th as the 2009 Xbiz Awards starts with a bang! A red carpet filled with photogs and the sexy stars of adult all helmed by The Star Factory!