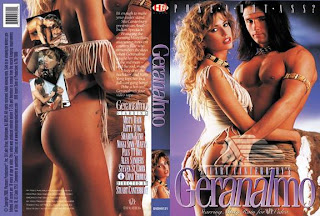 (Van Nuys, CA) December 23, 2008 – Wouldn’t you like to find the classic release Geranalmo under your Christmas tree?

Evolution Distribution is re-releasing this unforgettable feature from 1994, directed by the legendary Stuart Canterbury. Starring Misty Rain, Kitty Yung, Sharon Kane, Nikki Sinn and more, this Pleasure/HIP Video DVD appeals to all adult fans who love storylines and fantasy!
Two cavalrymen aren't having much luck finding renegade Indian known as Geranalmo (Chad Thomas), who leaves behind a trail of satisfied women. This guy is a true renegade who seduces women and leaves them wanting more! His totem pole invades Rain's backdoor territory, according to a favorable AVN review (adds the reviewer: ‘these are definitely a couple of liberated frontier women’ and ‘the production qualities are above standard for a video shot predominately outdoors’).

There’s hardcore campfire DPs and many steamy scenes and outdoor couplings! Rain sizzles as a young innocent country filly who remembers the days when Geranalmo taught her the ways of the red man... and the rod, man! Can you say ‘poke a hot ass’?
Geranalmo is being released through Evolution Distribution on 12-30-08. Reserve your copy today to complete your ultimate adult DVD collection! Merry Christmas from Evolution Distribution and the stars of Geranalmo!