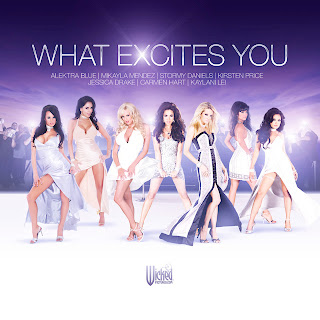 LOS ANGELES, CA (JUNE 4, 2008) - Now celebrating its twelfth anniversary, Erotica L.A. has firmly established itself as Southern California's premiere celebration of all that is provocative in popular culture. As a veteran exhibitor since the event's inception, Canoga Park based Wicked Pictures has both watched and participated in the show's growth. For 2008, the company's elite team of contract superstars – including Stormy Daniels, jessica drake, Kaylani Lei, Mikayla Mendez and actor/director Randy Spears - will be on hand to greet the thousands of fans expected to flood the Los Angeles Convention Center Friday through Sunday, June 6th - 8th, 2008. The company's acclaimed contract directors, including such luminaries as Brad Armstrong and Michael Raven, will also be appearing on behalf of Wicked at various times during the show, which is located at 1201 South Figueroa Street in downtown Los Angeles.

The company's dynamic convention headquarters ( booth #109), will be THE place for fans to meet the Wicked Girls, collect autographs, pose for pictures with their favorite stars, and get pampered with promotional DVD samplers and signing posters. Movies, shirts, and hats will be offered for sale, and savvy fans who buy DVDs will have the opportunity to get them autographed right at the booth. This stylish location will dramatically showcase the products that have made Wicked one of the most instantly recognizable brands in adult entertainment.

As always, Wicked's involvement with Erotica LA is being accompanied by no small amount of media exposure. Stormy is adorning the cover of the official show guide, while newly minted contract superstars Alektra Blue and Mikayla are featured inside. The guide also contains a collectable fold out poster featuring all of the company's lovely ladies. In related publishing news, Kaylani is appearing on the cover of Stiletto's June issue, which will be distributed at the show, and Mikayla is featured on the June cover of Glamour Girl, which will also be available at the venue.

Saturday will find Randy Spears hosting the F.A.M.E. Awards with Jesse Jane (jessica and Brad will also be unveiling the trailer for Fallen at F.A.M.E., and Stormy will be a featured award presenter). jessica, Kaylani and Mikayla will be appearing at the Erotica LA After Party at Crash Mansion, and jessica will be feature dancing again at the Spearmint Rhino. For more details, please visit www.erotica-la.com.

Pop culture enthusiasts the world over are invited to beat the Summer heat and bask instead in the refreshing glow of Stormy Daniels, jessica drake, Kaylani Lei and Mikayla Mendez - a quartet of new millennium superstars who continue to carve out distinct legacies in adult entertainment.

Vote For The Stars Of Wicked Pictures In The 2008